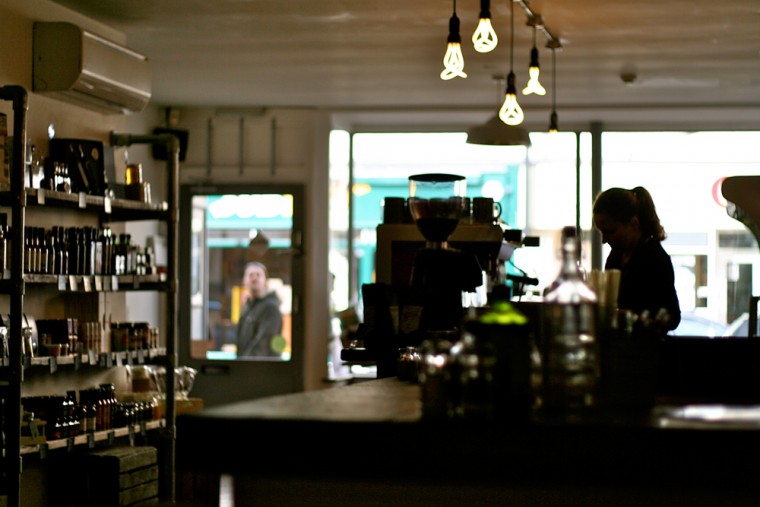 She was twenty three when she met Jerry, and she was working in another bar in another busy town in another remote country. Her days were spent sitting in cafés alone, eeking out a pot of tea for hours on end while reading a book. Just a face in the crowd, same as usual. She never felt lonely, still doesn’t. She is, and always has been, perfectly happy on her own, watching faces go by, marveling at them, imagining what their lives might be like; but she has always found that when you’re female, there’s only so long you can sit in a café on your own before someone decides you need company.
Usually, it would be a small comment – an enquiry into her well-being followed by a diminutive term, in the mother tongue of whatever country she happened to be in. They were the same the world over in her experience, just a little more forward the further south you went. Sometimes she didn’t mind, sometimes it made her angry, but whatever it made her feel, she always reacted outwardly in the same manner: she would smile politely, not engage, just give them a passive, tight-lipped smile that said “Fuck off, please.” and return to her book. Ninety-nine percent of the time, that did the trick.
But Jerry was the one percent.
She didn’t get the chance to ward Jerry off with her best withering half-smile. Without a word of warning, he sat down opposite her at the small table outside her favourite haunt and stretched his legs out to the side, casual as you like. Her immediate reaction was to give him her best stare: emotionless, yet with an edge of psychopathy. Again, this seemed to have no effect.
“Hi.” he said “I’m Jerry.”
“No one said you could sit there.”
“I thought you would recognise me.” he replied, feigning hurt. She continued to stare at him blankly, as a cold flower of panic instantly unfurled in her gut. She began looking for an escape route, rehearsing the story, planning her next stop.
“From the coffee shop. Last week?”
Relief flooded in and her skin prickled with cold sweat. Her armpits stung with fear, but her face remained the same.
“I was the guy that dropped coffee everywhere, remember? You helped me clean it up. You were reading John Fante.”
She remembered him then, but the situation more than Jerry. He had left little impression on her, which was notable in itself. Most people’s faces burn themselves into her brain without her wanting the intrusion and before she can blink, she has built them a full, heartbreaking backstory that plays out from birth to death in the time it takes for them to pass her by.
“I’m not great with faces.” she mumbled and looked back at her book.
“No problem. Mine’s not a particularly memorable one. Did you finish it yet?”
“Finish what?”
“The John Fante.”
“Oh. Yeah.”
“Did you like it?”
“I’ve read it before.”
“So I guess that’s a yes then. Have you read all his novels?”
“Yes.”
“What about his short stories?”
“Some of them. Look,” she said impatiently, placing her book on the table and looking at him squarely. “I’m sorry, but I’m not really…”
“Oh shit, am I being rude? I forget sometimes. I’m not great on etiquette. Where are you from? You have a slight accent.”
She looked at him properly. He was leaning forwards, his hands on the table, wide eyed like an eager, intelligent dog. His clothes were overtly casual – scruffy jeans and a tshirt that sported a hole at the waist – and his hair was short but obstinately curly, creeping over the tops of his ears and wrapping itself around his neck in tiny tendrils. He was not her type.
His face, however, had a surprising effect on her. Those wide, playful eyes, filled with mischief, and his mouth that never stopped moving, constantly changing his expression so that she couldn’t tell what he was thinking; but the most surprising thing of all was that when their eyes met, she smiled. Something involuntary occurred and before she had a chance to stop herself, the tiniest glimmer of a goofy grin had flickered across her face; and he saw it.

A year later, they were living in Jerry’s apartment overlooking the river, which they shared with hundreds of antiques in dark wood, porcelain, crystal and brass. The apartment had been his Grandmother’s until she moved into an old people’s home and when she eventually died and left it to Jerry, he hadn’t the heart nor the inclination to change a thing about it. The curtains were heavy and floral, the sofa ornate and covered in dusty, midnight blue velvet, the rug faded and threadbare; but they loved that place. Everything about it was home, from the doilies on the coffee table to the insistent clonk of the carriage clock above the fireplace.
What made life even easier was that, apart from her, Jerry was mostly alone. He was an only child whose parents lived in another country and never called. Like her, he had traveled solo, covering most of the globe. He did have some friends, but he had very few connections that went back more than four years and no other family to ask questions. With him, she felt safe.
It was a Sunday and she had been watching Jerry for about half an hour, as they sat curled in separate overstuffed armchairs in front of their fireplace, both of them pretending to read. Jerry looked nervous. His overly active face was rigid with concentration, his jaw looked tense and he stared at his book with a frown. She’d never seen him like that. He was always such a laid-back person, which was one of the main reasons she liked him. He was her counterpoint, always reminding her of the inherent simplicity of life, never one to overthink things. He had a way of keeping her tethered to the present without her noticing the ropes.
She watched him with growing dread as his leg bounced and he bit at the skin around his fingernails. Something was going on and she didn’t like it.
“Are you okay?” she asked him.
“Me? Yeah! Yeah I’m great! Are you okay?”
“I’m fine. You just seem a bit off. Is something wrong?”
He smiled with more than a drop of mania.
“No, of course not!”
He turned back to his book and stared at it with ferocious concentration as she continued to observe his profile in the half light from the fire.
Five minutes later, he leaned over and grabbed her hand.
“I feel like a walk. Let’s go for a walk!” He jumped off the sofa and bolted into the bedroom. “I’ll just be a minute! I want to change my trousers.”
She remained, bewildered and unsettled, on the sofa, listening to drawers and cupboards opening and closing.
He reappeared, wearing new trousers and the same crazed grin.
“You happy to go like that?” he asked.
She looked down at herself. Black T shirt, black jeans: pretty much what she wore every day. She gave him a puzzled look.
“For a walk?”
“Yep. Just a nice evening walk.”
“Where to? Are we going for a drink?”
“Maybe.”
“Do I need to change for any reason in particular?”
“No, you look great!”
“Jerry, what the fuck is going on?”
A brief moment of frustration flickered over his face, just a microsecond.
“Nothing. Why does there have to be something going on?”
She stared at him and he shifted uncomfortably from one foot to the other.
“Please, Sonja. Trust me. Just this once.”
She sighed and stood up. He took her hand and they headed out into the pale evening air.
They walked hand in hand along the riverbank, watching birds glide in and land on the dark water as the sun set. She thought about how crazy it was that she was doing that with someone, just walking hand in hand, a couple in love, two people with a life; a future and a past. Neither of them spoke as they walked. Jerry’s hand felt clammy in hers.
“Sonja.” he said suddenly, stopping and turning to face her. “You know I love you, right?”

Picture them both the evening before: lying in bed together, naked, him holding a cigarette to her lips for her to smoke as she weaved her fingers through his soft, dark blonde pubic hair, both of them grinning at how clever they were, how talented at making each other come, at making each other happy, at being a couple.
If he had asked her then, she could have laughed it off and carried on living in their delicious, private bubble. They could have laughed if off together, as a moment of overwhelming happiness that led to a moment of craziness. Maybe she could have said yes, caught up in the joy of then, suspending reality long enough to believe it would all be okay – just for a while, until she could find a way round it, or talk him out of it, or even divert his attention away from the actual event indefinitely.
Instead, she watched Jerry sink to one knee in front of the flickering night river, framed by the blurry lights of the bridge behind him, with all the gravitas of a man who was looking for a future.
And all at once, without knowing how or why, he undid them.

The guilt takes her breath away, the scale of it, the depth and breadth of it, that she took away so much of him. Not just their future together, the future he believed in so wholeheartedly, but a part of him that he will never be able to recover, a trust and an innocence that he discovered through them and that is now destroyed. She pulled the rug out from under him, she showed him behind the curtain and he can’t go back to before, can’t go back to believing. The loss and confusion in his face when she told him the lie that she had to tell him – that she no longer loved him – will never leave her. He knew it was a lie, but what he didn’t understand was why she was telling it.
The hours that followed were hollow and circular, a sickening and exhausting spiral of begging, head shaking, crying, calm, hysteria, pleading, demands, silence, noise, rage and love. She wanted so desperately to reach out and tell him she loved him, to tell him the truth and to hold him, to tell him she was sorry; but fear is what rules us. Above all else, we live in fear, are steered by it, even when we are brave. After all, what is bravery but a reaction to fear.

Although she had more possessions than ever before, they still all fitted into a single large bag, so she gathered her things as he ranted and pled, allowing his anger to wash over her cold skin in warming waves. She drank it in, tried to record it and store it somewhere deep within her, those final memories of him. Throughout it all though, she didn’t doubt herself, never faltered, never gave him any false hope. She stuck true to her course, completely confident in her decision. What she was doing was what she had to do.

She boarded a train at five o’clock the next morning and left all chance of happiness behind.